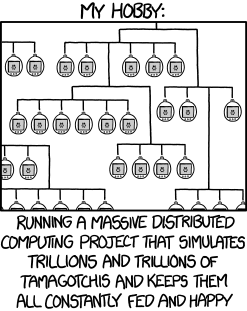 Some time ago, XKCD, an online comic, released a comic called 'Tamagotchi Hive': I happened to be at a time of my life where I wanted to take on a new project to do, but didn't have any access to my normal hardware tinkering tools: I only had my laptop and the Internet. I knew that a hacker called Natalie Silvanovich already managed to reverse engineer the Tamagotchi and dump the internal ROM. In the meanwhile, the datasheet for the microcontroller running the show also became available on the Internet, allowing me to make a rudimentary but functional Tamagotchi emulator. I added some state-machine-based 'artificial intelligence' to it to keep the Tamas alive and happy, and some logic to make them able to communicate with eachother and a webserver. The end result is the website you're looking at.

But what is the use of the website?
Nothing. I made it because it entertains me, and I hope it will be able to entertain others too. You can view it as an art project, if you so please.

Your AI is going haywire! It does strange things and not what it needs to do!
Yes, the AI is far from perfect, and sometimes it misses a button press or seems to give priority to the wrong thing. It is mostly self-correcting, though: usually after 15 minutes or so, it works its way out of whatever situation it got itself into and will take good care of its Tamagotchi again.

But I want to play with the Tamagotchis!
Sorry, that's not possible. The AI is running the show. Don't worry, while the AI may not be that intelligent and sometimes seems to do something stupid, it has never killed a Tamagotchi or made it unhappy for a long amount of time. The Tamagotchis are well cared for.

I still wanna play!
Then go and buy one! That way, you also support Bandai, the company who made these wonderful little devices.